As hard as Anaglyph stills are to capture and produce, Anaglyph movies offer the same difficulties as well as a host of additional challenges.

two still cameras.  Though it is possible to capture an anaglyph using one video camera and a beam-splitter, the resolution of camcorders is generally low enough to require separate devices for capturing the two views.  Secondly, intermediate video products produced at each stage can be quite large.  Still images are on the order of a few megabytes.  Videos are often sized closer to the gigabyte range and beyond even with compression.  This is compounded when you consider the number of steps that the source videos need to undergo before arriving as the final product you see.

Consider the following.  Two separate video sources must be captured and transferred to a computer.  Each source must first be deinterlaced.  The results must be combined into one Anaglyph video.  Sound from one or both video sources must be added to the movie.  The final video is then scaled down and converted to a web friendly format before uploading to an Internet site.  Compression can be used, but only at the highest quality settings, or the anaglyph will not be convincing.  Remember, this technique relies on precise coloring and displacement of two blended frames.

Some of these steps can be combined, but only if the conversion software is flexible.  Usually, however, even more steps are required.  For example, human eye separation is usually around 2.5 inches.  Getting two video camera lenses this close together is quite a challenge.  One way to solve this dillema is to flip one of the cameras for a closer fit.  The custom rig that I built shown on the next page uses this technique to bring the two camera lenses closer together.  A drawback of this method is that one of the videos needs to be flipped during as part of the deinterlacing process, or as a separate stage.

If a beam-splitter is not used, then the biggest challenge in creating an Anaglyph video still remains.  Frames taken by the video cameras are captured at about 1/30th of a second apart.  While this seems very short, the truth is that if two cameras are not synchronized precisely, video of subjects in motion cannot be turned into a convincing anaglyph.  The rig below utilizes a dedicated device called a LANC Shepard to synchronize the two cameras.  I have found that a synchronization of better than 1/600th of a second is required for success given subjects with average motion.  To capture highly dynamic stereo scenes, finer synchronization is required.

In order to increase the odds that two video cameras are sufficiently synchronized for motion capture, they should be of the same make and model.  It helps if they are made from the same production batch.  Still, compensation for inconsistencies within the electronic parts may be performed by the synchronization device.  For example, the LANC Shepard can be instructed to immediately turn on the slave camera when the master camera is turned on.  Further, it can delay the slave startup timing by a user-specified amount if synchronizing the two devices requires compensation.

Remember to zoom out to the same macro view on both cameras before capturing the video.  Image stabilization can ruin the stereo effect, and needs to be turned off.  Also, use an object with a flat surface (e.g., a CD) to check that both lenses are perfectly aligned with each other.

The custom rig built for stereo video capture using two Sony DCR-SR100s and a LANC Shepard is shown below.  The two cameras weigh a lot together making filming awkward.  The LANC Shepard is connected to both cameras, and faces the photographer for easy inspection.  A level (bubble in liquid) is present to make sure the video is taken level to the ground.  A screwdriver handle is mounted at the rig base for easy carrying and the frame has been dipped in a black liquid that solidifies into a rubbery surface well suited for grip.  The wires connect the master and slave cameras to the synchronization device. 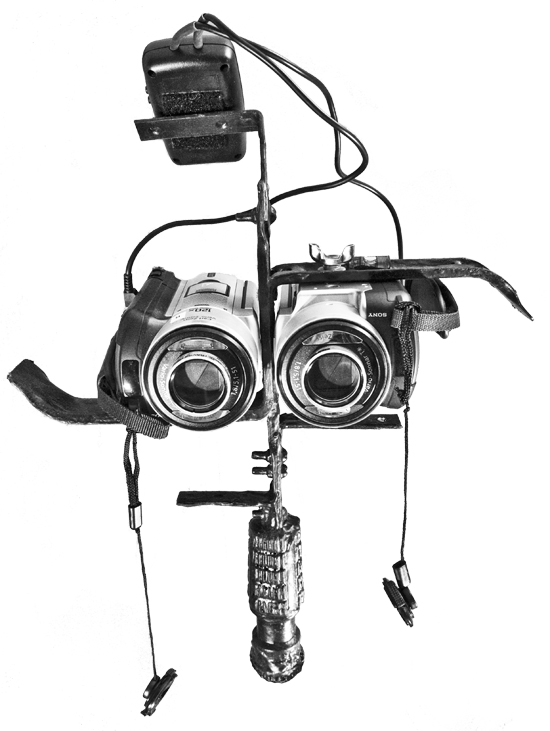 The back of the stereo rig is shown below: 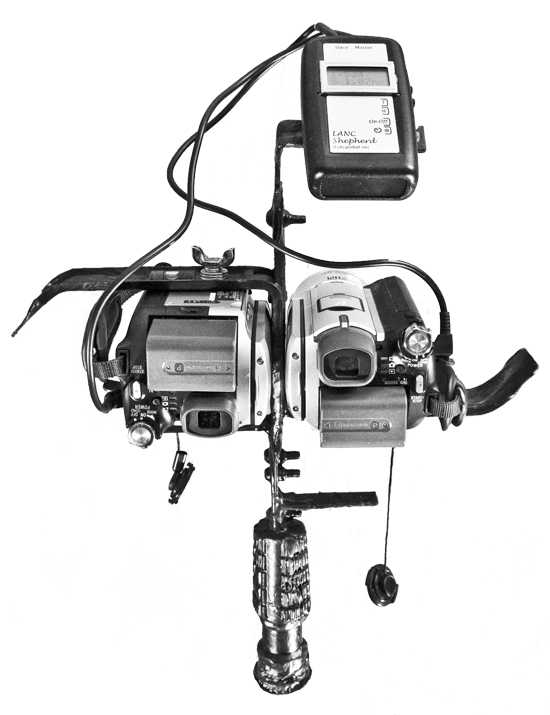 An example of processed output from the Stereo Rig is shown below.  This is a web-friendly low-resolution version of the stereo video.  You will need red/cyan glasses to view this video correctly.  The red colored lens should be on the left side for proper viewing: